The optimistic sentiment remained intact in the cryptocurrency markets, as the coronavirus outbreak continues, and how it could impact global economic growth. As we move into February, market participants in China are expected to return into trading after the Lunar New Year holidays. The development in equities markets is also another focus, as SHCOMP plunged as much as 9% at the open after the new year break. In contrast, the prices of bitcoin havebriefly touched the 9600 levels during the early Monday Asia session.

As markets are three months away from bitcoin’s halving, recent data shows that institutional investors and retail investors both now being positive on BTC’smedium-termoutlook.Sentix Strategic Bias, which gauges themedium-term perception of value on Bitcoin,has jumped to +0.23, the highest level since August 2019. Patrick Hussy, Managing Director at Sentix, believes that the reading is an indication of an increasing willingness to buy and is a positive signal for this asset class. 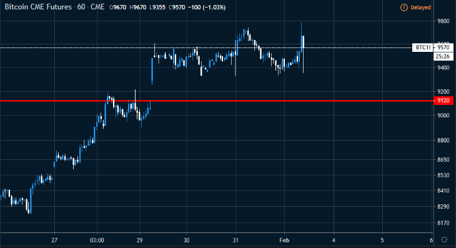 However, we would also like to point out that the CME bitcoin futures hourly gap remain unfilled. Figure 2 shows the gap up which produced last week is located between 9255 to 9120. We believe that the gap could remain unfilled if the positive sentiment and the momentum on bitcoin continue to surge. Still, a slight correction on BTC triggered byshort-term profit-taking could be possible, if seen, that could create a chance for filling the gap. Though, it could also mean another buying opportunity before the halving.

The positive sentiment is also reflected in the altcoin space, as leading altcoins like ETH and XRP both rose 5% to 6% earlier in the session, while mid/small caps name such as XTZ and ICX surged 11% and 22% respectively. Interestingly, data shows that ETH miners have been accumulating more ETH tokens in the past six months.

Data from Santiment shows that the number of ether tokens held by all ETH mining pools is reaching its all-time high of 1.69 mln ETH. Many Eth watchers considered as an underlying positive factor for the token.

Japan has been further warming up for its digital currency. BoJDeputy Governor Masayoshi Amamiyasaidthe central bank must be ready to issue digital currencies if rapid technical advances in settlement systems boost public demand. He added that it was “essential for the BoJto continue examining the possibility of issuing CBDCs.

Cardano could be one of the most decentralized cryptocurrencies, that’s according to Cardano co-founderCharles Hoskinson.In an interview with Cointelegraph, Hoskinson said he believes the token will benefit by the upcoming hard fork and could eventually further increaseCardano’s decentralized nature.

BTCUSD has been extending its rally after securing a30% gainin January, and the pair continued to stay above the 200-day moving average.

However, the rally may look a little tired. While the price has produced some higher highs, both the 9-day RSI and the ultimate oscillator were not able to follow suit, suggesting the rally momentum could somewhat fading.

The 200-day moving average and the 61.8% Fibonacci Retreatment seems decent support if a price retreat is seen from here, and those levels are also matched with the lower support of the recent channel.

Moreover, OKEx’s BTC Long/Short Ratio has been staying near the recent high, suggesting the potential profit of the shorts has been getting higher.

XRPUSD’s rally could come to a critical moment as the pair seems to about to retest the 200-day moving average.

The Bollinger Bands have initially started to squeeze, suggesting the volatility may increase in the foreseeable future. The RSI was also indicating that the momentum seems to remain intact.

While an imminent attempt of breaking above the 200-day moving average is likely if confirmed, the next level to watch could be the 0.30 area, and the lower end of the recent channel could also be the lower end reference.

The recent ETHUSD rally could be running out of steam, as indicators didn’t show sustainable momentum, with the RSI has been unable to produce some higher highs alongside the rally.

Also, a MACD bearish crossover seems in the making, that considered as a short-term bearish signal if that’s confirmed.

We’ve seen a similar case back in mid-January, where the price has been rallying, and momentum indicators didn’t follow.

The pair could test the lower channel support, which is in the182 area if history repeats itself.