The UK is delivering its last employment report for 2019 on Tuesday at 09:30 GMT and forecasts are for softer prints which are likely to increase the odds for a rate cut, consequently triggering a downside correction in the pound ahead of a more important batch of data releases later in the week. The decline, however, may be limited as markets anticipate a more expansionary fiscal policy under the new minister of finance.

Fiscal policy reduces the need for a rate cut

Although the British currency had a bad start to the month, it managed to recoup part of its losses last week mainly because of the resignation of finance minister Sajid Javid, which allowed Chief Secretary to the Treasury and Johnson’s close ally Rishi Sunak to take his place. While such a departure would otherwise generate a risk averse behavior among traders, especially in a country where foreign and domestic policies are coming under review following the exit from the EU, the pound still came under buying interest as the new nominee is considered less of a fiscal conservative and therefore could deliver bigger public spending than Javid wanted.

Particularly, the UK Prime Minister pledged to boost spending on healthcare, education and policing during his election campaign in order to please his new supporters in rural areas who traditionally voted for the opposition Labor party. The targeted areas, however, are less productive, slow-growing and mostly immobile, so Johnson will need a larger budget to deliver on his promise.

Since the Conservatives promised not to raise income or VAT taxes, extra borrowing seems to be a more politically safe and acceptable option given the current low interest rates and the fact that public deficit to GDP is below the current 2.0% restriction and hence there is some room for extra borrowing. 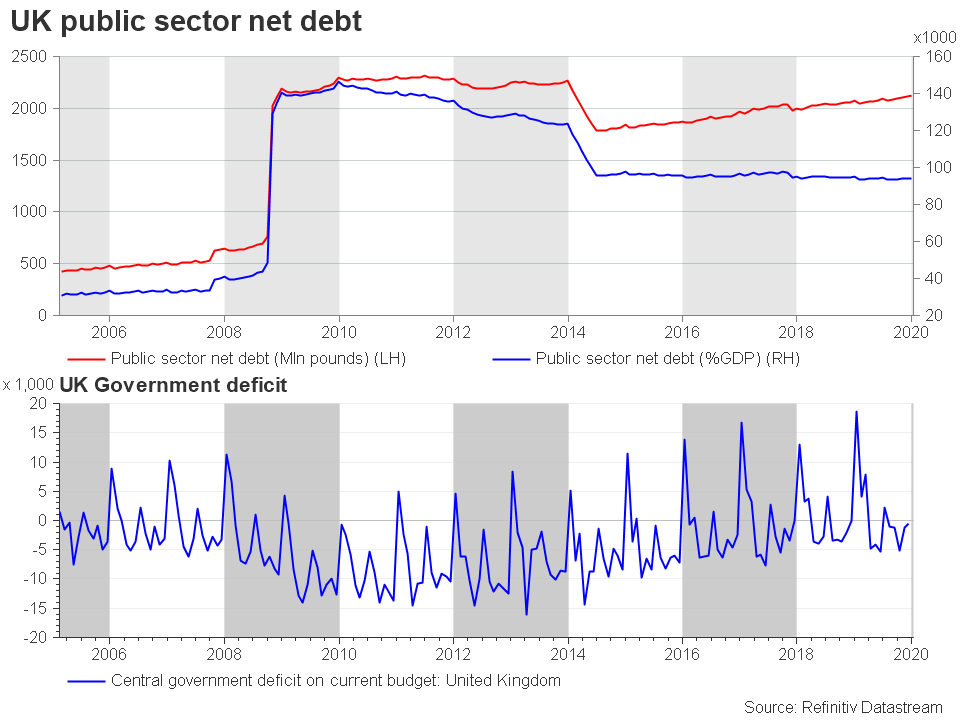 Such an action, however, is expected to elevate borrowing by 17 billion pounds by 2022-23 instead of creating a 5 billion pounds surplus as declared by the Conservatives, consequently increasing the fiscal deficit by more than 0.5% of GDP. Javid, who previously had conflicts with Johnson’s chief strategist, Dominic Cummings, did not want to overdraft spending but keep day-to-day spending balanced at the current levels by 2022-23, something that subsequently forced his resignation when he refused to change his advisers as the UK prime minister asked him to.

On the other hand, the new nominee Rishi Sunak is more flexible, and markets are now more optimistic that a more expansionary fiscal package could soon be approved even with some delay beyond March 11, when the government’s budget is scheduled to be announced, if the chancellor needs some time to reconsider his position.

In the monetary front, the above scenario would reduce the need for 25 bps rate cut by the Bank of England which is currently not expected to happen before the end of 2021. In the near-term, however, and until the budget details get the green light, any discouraging stats could keep the case for a rate reduction open, as Tuesday’s employment report is likely to do.

Employment report: what to expect

After November’s upbeat results, analysts believe that the three-month average weekly earnings, which were on the back foot since mid-2019, fell to 3.0% y/y from 3/2% in November. If met, that would be the smallest increase since September 2018 and another reminder in addition to the recent weak GDP growth figures that household spending may have remained subdued at the start of the new year although recent stats indicated some improvement in both business and consumer sentiment. The report is also expected to show a smoother increase of 143k in new job positions compared to the impressive 208k addition in November, whereas the unemployment rate will likely remain the bright spot if it holds at a 46-year low of 3.8%. Yet, the latter may be ignored if claims for unemployment benefits for the month of January delivered along the December brief rebound. 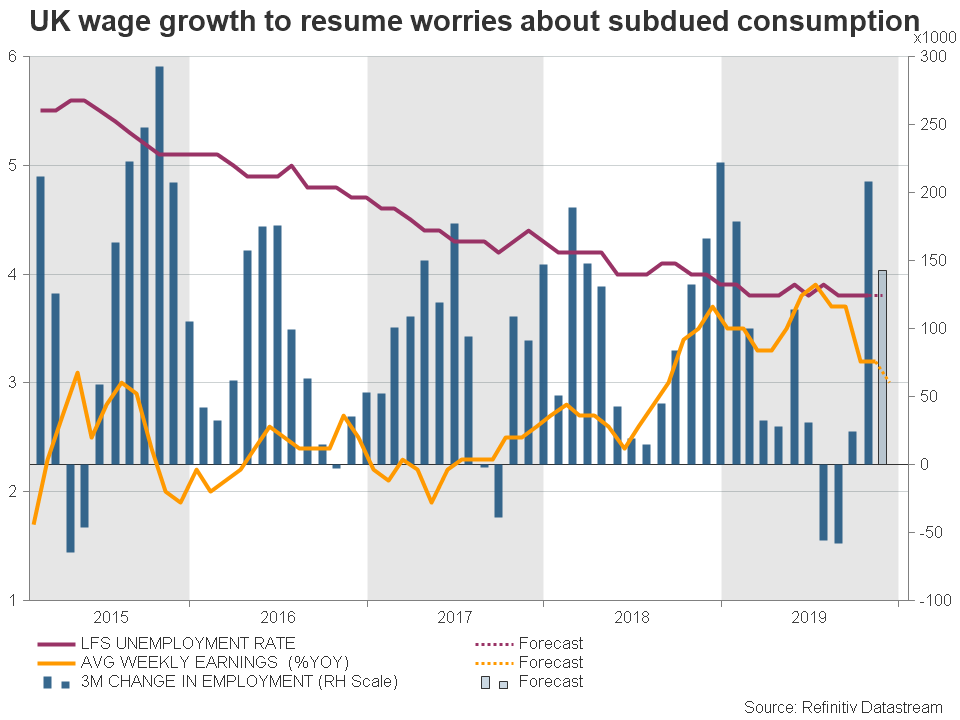 As regards the market reaction, wage growth figures could bring some caution in FX markets, but traders may wisely not hurry to reduce their pound exposure until a more important bunch of data releases including January’s inflation, retail sales and preliminary readings come in light later in the week. Hence there is potential for a downside correction in the pound, but this could prove short-lived if the currency finds support near 1.2950 versus the US dollar and around the short-term ascending trendline. Any break lower could shift attention towards the 1.2900-1.2870 restrictive region.

Otherwise, if the numbers – especially average weekly earnings – arrive better-than-expected, GBPUSD could re-challenge the 50-day simple moving average that has been a barrier to upside corrections recently. If it falls apart this time, resistance could run up to the 1.3180-1.3215 restrictive region.