Rapid and reliable coronavirus tests have so far defeated the combined research skills and financial firepower of the richest countries and corporations.

Yet a company with four employees, whose head office is registered to a ground-floor flat in the village of Toddington, 40 miles north of London, claims to have developed a saliva test that takes just 20 seconds to process.

If it works, it could offer a route out of the coronavirus crisis and prove a remarkable testament to the ingenuity of a man with no formal scientific education.

But the early excitement also shows our collective desperation for a silver bullet and willingness to suspend disbelief.

The “Virolens” test was unveiled last week by an obscure British tech company called iAbra. People take a simple mouth swab, which is dropped into a black box. Inside the box — iAbra says — is a digital camera attached to a microscope that can examine the sample and see if it contains any Covid-19 virus. It displays the answer within seconds.

The device is manufactured in Hartlepool, in the north-east of England, by a listed UK company, TT Electronics, whose share price rose more than 40 per cent on last week’s announcement, valuing it at £439m.

Heathrow airport and Leidos, a $13bn US software company, were touted as the test’s “launch customers”.

Greg Compton, iAbra’s 33-year-old chief executive and the lead architect of the test, last week said the company had also seen “huge demand from universities in the US” and declared the test “a significant step forward in the battle against Covid-19”.

But both Heathrow and Leidos said they had not actually placed any orders for the test, though Leidos said it was in “active negotiations”.

“If we made a slight, slight miswording of [our release], I apologise for everybody, but fundamentally, we’re trying to do a good thing for humanity as quickly as possible,” Mr Compton told the Financial Times. He described TT Electronics’ share price jump that followed the news as “chicken feed” in the grand scheme of things.

The Virolens test is “based on microscopic holographic imaging and artificial intelligence (AI) software technology”, according to iAbra, which is a highly specialised field of structural biology. The company says the technology “uses a digital camera attached to a microscope to analyse saliva samples, with the data run through a computer which is trained to identify the virus from other cells”.

“We only need 10 viral particles in a sample to give a positive result,” Mr Compton told the FT. “By the end of January, we would be able to test everyone in Europe per month.”

iAbra seems an unlikely company to deliver such a product. Mr Compton, who grew up in Bedfordshire and left school aged 17, said he was “always a computer kid”, and wrote his first computer program aged seven. He had several IT jobs, first at Italian telecoms company Tiscali, then at Capita and BSkyB, but never any formal training.

He said he came up with the idea for the Covid-19 testing technology while standing at Dubai airport with his sister.

None of the other employees has any expertise in viruses or microscopy, though one has a PhD in physics.

In a promotional video, iAbra’s head of manufacturing and operations, Shane Tingey, whose background is in aviation, explains that he got the job after his sister-in-law said Mr Compton needed to “talk to someone about manufacturing”. “If anyone had said to me, ‘Do you want to come and change the world?’ I wouldn’t have believed them,” he says in the video.

Before iAbra changes the world, it has to prove its product’s reliability, which has not yet received any external regulatory validation. Nor does there seem to have been any oversight of the underlying data for the company’s claims for the test’s accuracy.

“We’ve put out our analytical specificity trials, and we’re following up with clinical trials,” Mr Compton told the FT, “but all this takes time”.

“I’ve taken huge personal risks from a financial perspective, in order to bring this to market,” he said.

One scientist said he was immediately concerned by the wording of the company’s release, which suggested that the virus is “another cell”, and therefore showed “either carelessness or frightening ignorance”.

Despite Mr Holland-Kaye’s enthusiasm, Heathrow now says it has no insight into the test’s accuracy. Virolens is one of three rapid tests that has been trialled at the airport in recent weeks, with the results from all of them sent off to the government’s CONDOR research programme.

“If it turns out that one of the suppliers’ tests is not accurate . . . then obviously it wouldn’t be used,” Heathrow told the FT. When asked why Mr Holland-Kaye had called the test “potentially more accurate” than existing swab tests, the company said: “That type of statement would have been provided to any of the three suppliers that we did the trial with . . . It’s not that we’re endorsing iAbra specifically.”

Mr Compton said he spent years perfecting the code for the algorithm behind iAbra’s AI technology, and that partnering other companies that specialise in microscopes was a “marriage made in heaven”.

But it is not entirely clear how the company calculated the test’s accuracy, and it seems that it may have misrepresented the involvement of virologists at the University of Bristol.

iAbra sent the FT a presentation with some information on the methodology used to check the accuracy of the tests, though several scientists said it did not contain enough information to explain how the company had reached its conclusions on the test’s specificity and sensitivity.

“We’ve put a method out there and a platform, and the next set of announcements will be about the detail around trials,” said Mr Compton. “We understand that it’s important to get confidence around the system.”

In its initial press release, the company said, “the Virolens® system has a 99.8% sensitivity and 96.7% specificity, based on the results of an internal in vitro validation study, designed by the University of Bristol, demonstrating an exciting proof of concept”. 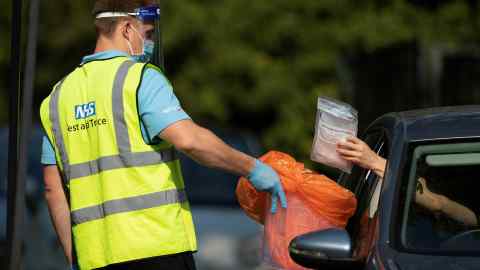 But academics at the University of Bristol said they were not involved in any study that tested the sensitivity and specificity of the tests and complained about the wording of the release. Bristol university virologist David Matthews only provided samples of the Covid-19 virus to the company and was not in any way involved in its validation, he said.

Mr Compton said that researchers at Bristol university had done more than simply provide samples and that they had helped the company design its study. Any misrepresentation in the press release had not been “done with any malice”, he added.

Jon Deeks, professor of biostatistics at Birmingham university, said, “we are in a pandemic, people are dying from the disease, and a company decides that it is reasonable to mislead us all to make their test look like the best thing available”, referring to the claims being made for the test’s accuracy. “Legally, they can probably get away with this, but there cannot be any consideration that this is morally acceptable.”

Mr Compton said that this characterisation was “incredibly unfair”. “We’re trying to do our best to make stuff better. We have a community of naysayers who would like us to suffer for months,” he added.

Peter Török, professor of optical physics at Imperial College London and a specialist in digital holographic microscopy, described the scientific information provided by the company as a “mishmash of different things”. While he said that the technology was theoretically possible, he noted that there was not yet enough evidence to substantiate the company’s claims.

For TT Electronics, the manufacturing contract has the potential to transform a company that engineers and manufactures sensors and semiconductors at sites across the UK. Richard Tyson, TT Electronics’ chief executive, described the technology as “very exciting” and said, “we genuinely feel this could be game-changing”, though the company acknowledged it had no involvement in validating the accuracy of the test.

“Our team in Hartlepool has been working on this product for about three months and has significant expertise in the manufacture of electronic devices for a variety of applications,” the company added. “Like any medical device, Virolens needs external approval. We have been clear there are milestones to pass on external and regulatory testing.”

US chip giant Intel, which also partnered iAbra on the creation of the AI engine for the testing technology, posted an article about the test on its website on Thursday that has since been removed. It did not provide a comment on why the article had disappeared.

The credentials of the technology are further muddied by apparent connections to an organisation that spent decades working on hoaxes about the fictional monster Big Foot.

Lord Global Corporation, formerly called Bigfoot Projects Inc, is financing the distribution of Virolens machines in Australia, Latin America and south-east Asia through KeyOptions, an Australian firm that “helps provide meaningful metrics that have impact on your operations and profitability as well as keeping people safe and secure”, according to its website.

Joseph Frontiere, chief executive of Lord Global, told the FT he had taken over control of the listed company this year and it was now an entirely separate operation with no connections to the former business. It is in the process of changing the entity’s name to 27Health Inc, subject to approval from US regulators.

Lord Global’s “chairman of the board” — and indeed the only other person working at the company — is 24-year-old Alexandra Aizenshtadt, who is Mr Frontiere’s wife. Ms Aizenshtadt’s LinkedIn profile explains that she “enjoys a strong worldview and deep background analysing trends and communicating their complex concepts”.

But regardless of iAbra’s connection to a company with such a colourful history, scientists remain concerned by the dangers inherent to rolling out Covid-19 tests before they are properly validated.

Lawrence Young, professor of molecular oncology at Warwick university, sounded a note of scepticism on the “barrage of these tests being introduced or speculated about”.

“It’s a bit like the wild west with this testing,” he said. “It’s quite worrying.”